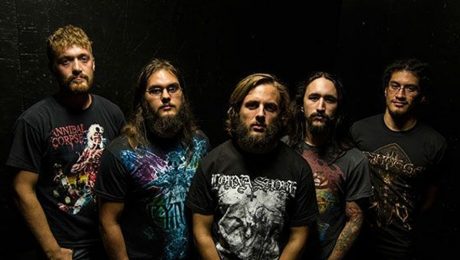 Abiotic has released a new track called “Grief Eater, Tear Drinker“, which features ex-The Contortionist vocalist Jonathan Carpenter. You can find the video for the track below. The band’s new album Ikigai, will release on February 12th.
Abiotic
Read more
No Comments

Abiotic has released a music video for their song “Souvenir Of Skin” from their upcoming new album Ikigai. The single features a guest appearance from Trevor Strnad of The Black Dahlia Murder. You can find the video below, as well as the track list for the upcoming album and featured guests: Ikigai track listing: 01 – “Natsukashii” 02
AbioticThe Black Dahlia MurderTrevor Strnad
Read more
No Comments

Abiotic has announced that their new album Ikigai will release on February 12th through The Artisan Era. The album was produced by Tony Simone. Vocal production was handled by Nick Loiacono. The album will feature a list of guest appearances from members of The Black Dahlia Murder, Fallujah, Entheos, and more. You will be able to pre-order the album soon. The band’s
AbioticArchspireBrandon EllisChaney CrabbEntheosFallujahThe Black Dahlia MurderTrevor Strnad
Read more
No Comments

Abiotic dropped a live video of a performance of their song “Emerald“. The video was filmed during their tour with Suffocation and Belphegor last year.
Abiotic
Read more
No Comments

Abiotic have announced that they have officially signed with The Artisan Era and have been working on a new album that will be releasing later this year. They’re shooting for a summer release. The band had the following statement regarding it: “We could not be more excited to join the ranks of the incredible roster on The
Abiotic
Read more
No Comments
TOP